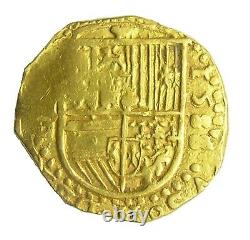 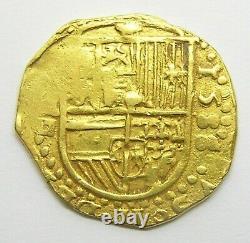 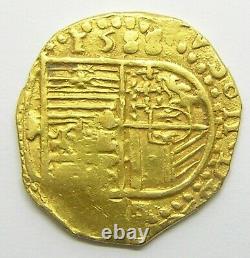 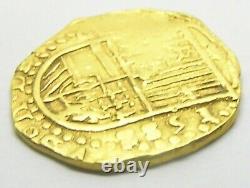 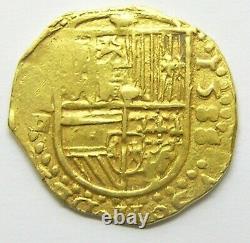 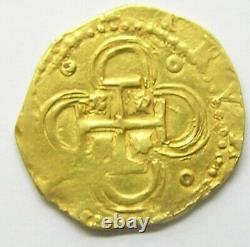 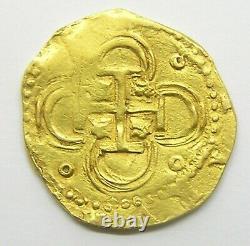 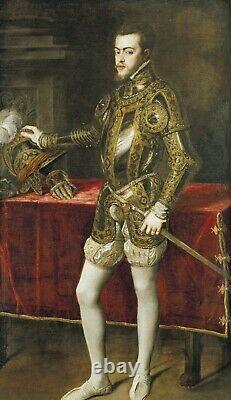 This is an original Spanish gold 2 escudos coin, minted in Spain during the reign of King Philip II. The obverse of this coin displays a Jerusalem cross with quatrefoils in each angle.

The reverse displays the royals arms of the'House of Habsburg'. Very rare to have a piece fully dated like this example! It is an exceptional coin, the date can't get any better (for England anyway) as 1588 was the year the Spanish Armada set sail to invade England and was soundly defeated, being one of the greatest moments of the reign of Queen Elizabeth I.

This coin was minted at Seville and with this date one other is slabbed as the only known example - this coin now making it two!! With the discovery of untold riches that were mined in the Americas, the Spanish became the premier supplier of gold and silver coins for the world. Although Spains mighty armada strove diligently to deliver the wealth to the King, both pirates and bad weather became such obstacles that many galleons were lost at sea. Spanish gold coinage of this historical period was decreed by the King to be 22 carats and was hand struck from dies and cut to weight.
Minted in five denominations in gold, the largest was the eight escudo, however, the 2 escudo was famous in the colonies and among pirates as a doubloon. A common working man at this time would have to work 4 months to earn a single doubloon.

26.87mm x 25.90mm. This coin is unconditionally guaranteed be an original and. To date from the period described. A certificate of authenticity will be supplied on request.

The item "1588 Gold Spanish Armada 2 Escudos of King Philip II Seville Mint VERY RARE" is in sale since Sunday, October 18, 2020. This item is in the category "Coins & Paper Money\Coins\ Medieval\European". The seller is "wear-the-past" and is located in Bath. This item can be shipped worldwide.