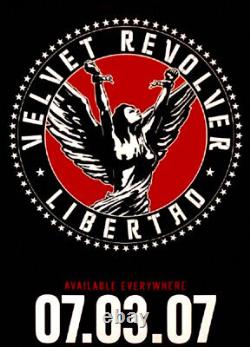 Velvet Revolver LIBERTAD Original Music Poster 2' x 3' Rare 2007 Mint New Condition and Rolled. Large Wall Size (measures 24" inches wide by 36" inches high). For the July 3rd 2007 RCA Records Release of Velvet Revolver's Album Libertad featuring a beautiful illustration graphic from the album's cover, a stylized 10 pesos coin from Chile produced from 1976 to 1991. The coin is an allegory to the Coup d'etat in Chile in 1973. Those coins had borne the image of a winged female figure wearing a classical robe and portrayed as if she had just broken a chain binding her two hands together (a length of chain could be seen hanging from each of her wrists); beside her appear the date of the coup d'état Roman numerals and the word LIBERTAD (Spanish for "liberty"). After the return of democracy, a design with the portrait of Bernardo O'Higgins was adopted. Libertad is the title of this, Velvet Revolver's second album.

The album was released in the US on July 3, 2007. The name translates to "liberty" or "freedom" in Spanish. When Velvet Revolver formed a few years ago and released "Contraband, " detractors immediately started betting the band would soon implode in a drug-fueled disaster.